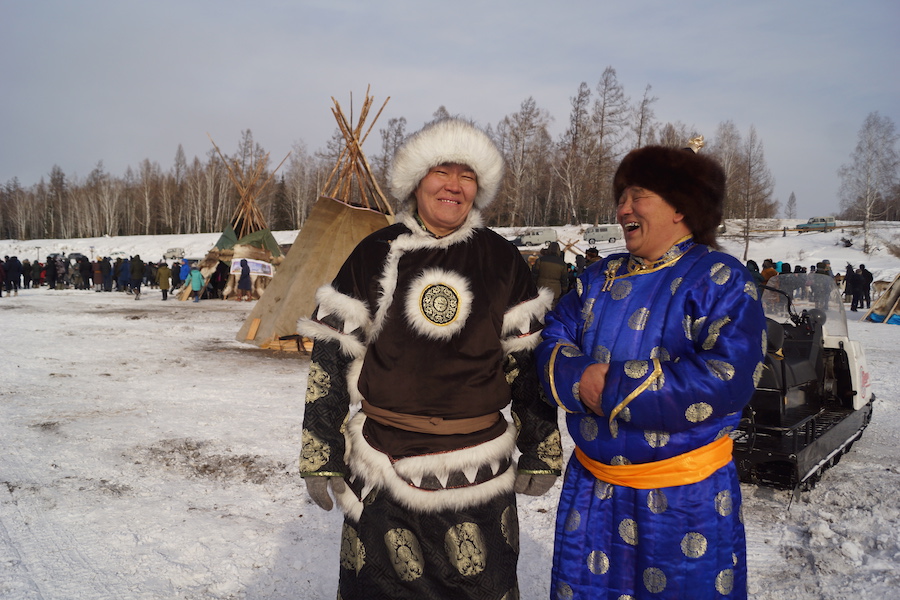 Natalia Durbanova and Maksim Fomenko are leading the small company Sibwaytour in Krasnoyarsk. Equipped with two all-terrain vehicles, they show tourists around the lesser known areas of Siberia: the region Krasnoyarsk, the Republic of Khakassia as well as Tuva and even western Mongolia.

Getting off the train or plane in the third-largest city east of the Ural Mountains, they take off between 10 hours and up to 21 days. Tours and expeditions in summer as well as winter bring you closer to myth-enshrouded power places of shamans, people of the taiga and the incredible vastness of northern Asia: endless taiga, dry steppes, high-towering mountain ranges, frozen rivers and an insanely blue sky.

I met both during my own trip from Berlin to Seoul in January 2019. The days were relatively mild for Siberian standards and our conversations endured for a long time. Keen about their enthusiasm and rich knowledge about the region, I do not want to withhold you Natalia’s thoughts about Siberia and its tourism industry.

For further information, you can also check out their website www.sibwaytour.com. I went from Moscow to Vladivostok myself, which you can read here. I further dived into a detailed packing list for such winter adventure. Check out my gallery if you’re more interested in photographic scenes of my transsiberian experience in winter.

Nathalia, how do you describe Siberia to people who have either no or typically false ideas about it?

Siberia is different. This region of the world shows an incredible contrast between its cities and rural areas. We indeed feature a vast area of Tundra, Taiga, steppes and mountains. It can be ice-cold in winter with temperatures below minus 40°C, but get even beyond plus 30°C in summer. If the land mass behind the Ural Mountains was a country by itself, it would still be the largest country in the world. We, nevertheless, have well-developed cities. Three of them – namely Omsk, Novosibirsk and Krasnoyarsk – have more than 1 million inhabitants. You will find modern hotels, museums, theatres, sport facilities and much more.

There’s also a question of where Siberia actually is. Territory-wise, Krasnoyarsk region is placed in the middle of it. The Yenisey river running through our city splits our land in halves. By political boundaries, Siberia ends just behind lake Baikal. The Far East Federal District begins with the Republic of Buryatia and its capital Ulan-Ude.

Something many people are not aware of, is our ethnic diversity. Russians only came to conquer this land by the 16thcentury. Until then, many ethnic tribes have roamed these lands and they do until now! Northern Asia is sparsely populated with about 3 people per square kilometre, but gifted with great diversity. The Ket, Chukchi, Evenki, Tuva, Khakassia, Udege, Dolgans and dozens of other ethnicities can be found here. Many have their own languages of which many are threatened to go extinct. The Russian state tries to support these communities so their culture doesn’t get lost.

Truth be told, we are a place of incredible nature. Impassable nature surrounds you quickly when leaving populated areas. It’s fascinating, tranquil and dangerous at the same time. When we get out into the taiga, we have all sorts survival equipment with us. Everyone, nevertheless, who has visited Siberia and tried to pay a tribute to this land was rewarded ten-fold.

What does Siberia mean to you, personally?

Siberia is my identity. I am first of all Siberian, secondly Russian. It doesn’t mean any separatism, like in Scotland for example, rather it means that we are different in terms of mindset.  The Siberian character is somewhat more straight forward than the general Russian soul, a bit simpler, but more endurant. What is hard to imagine for other people, for us it’s just normal life – such as -35°C outside). Actually, Russians in the European part – 5 hours by flight away – perceive us as closer to our nation’s roots and “purer”. Whatever that means, but it is one reason for them to visit Siberia. We are said to be less money-minded, but also less emotional. Russians already tend to smile little, but we smile even less (laughs).

Yes, we are quite different to other regions of the largest country in the world. I am proud of Siberia, its land, nature and people. I am Siberian.

Can you give us an insight what it means to grow up in Krasnoyarsk region?

When you grow up in Siberia, you relate to two things in a very different way: distances and population. On the one hand, living abroad taught how much different my perceptions were. My local friends were shocked to hear me talking about 500 kilometres as something nearby. The closest town to Krasnoyarsk is Novosibirsk. 800 kilometres, only! That’s a stone’s throw for us. On the other hand, I am used to wilderness and little population. India’s density is 526 people per square kilometres compared to 3 in Siberia.

You have lived abroad for a long time, but returned to Krasnoyarsk in 2017. Why did you come back?

I first left Krasnoyarsk in 2005. I left not because I didn’t like being in Siberia, but because I wanted to try something new and get myself out there. After 9 years abroad in India, Malaysia and Australia as well as 4 years in St Petersburg, I felt it’s time to come back. I had achieved what I searched for: personal development, learning and understanding other cultures, tolerance. Every country where I lived taught me something different.

When I lived abroad, usual reaction of people who first met me was: “Oh, you are from Siberia”! Depending on how diplomatic person was, it was either said or thought: “hold on, are there people too in Siberia, not only bears?! But then many people told me: “We would love to come to Siberia, if you were be there”. Interest in Siberia is there, especially Transsiberian railway being the magnet, but it seems like “terra incognito” – attractive, and in the same time so many unclarities – how to go there, visa, logistics, etc. If somebody will organize these things, people would be happy to come.

With the aim to move Krasnoyarsk region forward, I came back. My original idea was to organize Transsiberian tours, but after I took the Transsiberian railway all the way from Moscow to Vladivostok, I figured the market is really well developed for tourists and contested. Many operators from abroad feature tours. I was looking for some niche market.

One day, I walked around Krasnoyarsk and a pumped-up all-terrain vehicle caught my eye. The text on the car advertised expeditions into Siberia, but it was all in Russian, as well as website of the company. I contacted the company owner Maksim and we very soon were clear on what to do: open up expeditions and tours to rather unknown areas of Siberia to the world.

What is your motivation for Sibwaytour?

I’d simply say we want to open up Siberia to the outside world and convince people, that it is much closer than it seems to be. It is a gorgeous regions with something offered for every taste.

Where do you see potential for Krasnoyarsk, Khakassia and Tuva 1. to be put on the map of tourist and 2. develop the region through tourism sustainably?

Firstly, I believe we can work on our own confidence. We are unique in the world and can be proud of this. Sibwaytour’s niche is also less explored. We feature a special combination of North Asia’s ethnic tribes and stunning nature. That is our unique selling point.

Luckily, we are far from being overrun now or in the near future. So, regarding your second question, Sibwaytour’s expedtions and tours into rural areas brings some prosperity into the region. Tourism will play a growing role for rural areas to maintain their traditional life. The climate is changing and people move into towns. The traditional life is threatened, but well-developed tourism can foster Russian state’s aim to maintain rural, ancient lifestyles.

What are the hindrances to further development of your own business as well as other in the tourism industry? How can they be overcome?

To answer this question, I’d like to differentiate between internal and external hindrances. Internally, infrastructure remains in need of improvement. We cannot offer 4-star accommodations in rural areas and apart from a few local highways, roads are tough to ride on. It is necessary for us to form the right expectations to our customers or incoming tourists in general. We need to give maximum detailed information before the tour/ expedition so people will accept it. It will play as a part of the total experience, not as a problem.

Our remoteness is special, but also a hindrance. Apart from those coming by train, practically everyone has to fly via Moscow. There are plans by Areoflot [Russian aviation company] to make Krasnoyarsk a regional hub for international flights: The international airport Yemelianovo has already been built. We are hoping for increasing connections.

Externally, there is a huge lack of information. Krasnoyarsk region, Khakassia and Tuva are simply not on the map. People simply don’t know about us, and for us to reach out to European tourists requires a whole lot of resources. Advertisement via FB or google requires a large budget that our five-man company cannot offer. Hence our strategy is to connect to European travel agencies, who will connect us to European tourists. That’s why we actively participate in European exhibitions. Luckily, local authorities in Krasnoyarsk support us by partially financing exhibition booths.

Further, there are negative stereotypes about Russia and Siberia. In this sense, big sport events such as the FIFA World Cup or the current Universiade 2019 in Krasnoyarsk are amazing opportunities to counter those. Maybe they don’t make too many tourists deicide to travel Khakassia or Tuva immediately, but they put us on the map for so many people. In marketing it’s known that the first information one relies on is one’s own experience and secondly the opinion of your friend. Can you imagine how many people will spread their own personal experience in Russia around the world?

Last but not least, visas can be an issue for some people. Unfortunately, common people are facing inconvenient procedures. There is not much we can do about it. In 2020 Russia plans to launch e-Visa for some countries. We hope this project will take off and will make traveling to Russia a lot easier.

How do you see the future of Sibwaytour?

I’m quite optimistic for our business to grow. I see more and more people from all over the world being interested in visiting us. As we have not been operating for a long time, we will continuously alter and grow our portfolio. Tailor-made trips will remain crucial for us.